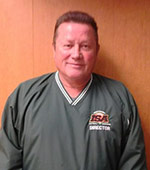 Steve was inducted into the ISA Hall of Fame on December 5th in Tupleo,MS. Born 8-25-55.Saved by the Grace of God. Husband of Maria, father to three softball girls Caron(Greg Burr), Rachael (Jeremy Trott) and Lori (Tyler Shoemaker). Grandfather to three McCartney, Jaxson and Harrison. Started playing softball at age of 14 with the adults. Began association with ISA in 1987 and became State Director for TN in 2009.I am thankful and proud to be ISA for life. My blood is green except when it is orange for football (UT). Thanks SL