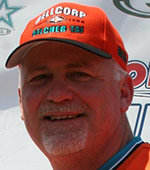 Todd Joerling of Defiance, MO was nominated to the ISA Hall of Fame in the Players Category. One of the most decorated players in the annals of ISA history, Joerling has played on 4 Super World Series Championship teams and 4 Runners Up teams. In 1997 he led Sunbelt/Dan Smith/Easton of Centerville, GA to the crown with a .690 batting average and led the tournament in home runs with 8 as the series MVP. He added his second series MCO in 2002 leading Dan Smith/Backman/Menosse/Easton of San Jose, GA to the Championship in Easley, SC. Joerling also won titles in 1990 with the Steele’s Silver Bullets of Grafton, OH and 1999 with Team Waston of Burlingame, GA in Winter Haven, FL where he was the Outstanding Offensive Player Award recipient. The man from Missouri was named to Super World Series teams in 1989, 1990, 1991, 1994, 1994, 1997, 1999, 2002, and 2003. He was also selected to the ISA Hall of Famer Jerome Earnest’s Supreme Softball Team of the 90’s at shortstop. Besides the above mentioned teams Joerling has also played with Lighthouse/Sunbelt/Worth and Bell Copr. of Tampa, FL and Bell Corp/Sunbelt/Easton. Todd and his wife Brandee have 2 children Draby and Trevor.