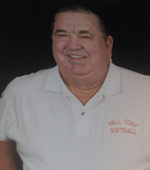 When you think of Woody Bell, you immediately think of the great Bell Corp. teams of the past two and a half decades who won the Men’s Major World Series and the ISA Super World Series in 1989. Woody has said that softball is the great sport in America today. He most enjoys seeing two evenly matched teams playing, where defense, not offense becomes the deciding factor in the game. He has always insisted that his team members were gentlemen on the field – No bad language, no arguing with umpires, and never ignore the old fans or the young ones. His dedication to the sport has led him to sponsor as many as four teams in a season and to travel to 142 consecutive tournaments.